[Any reference to “this law” in the text below should be understood to refer to “The Antiquities Protection Law promulgated by Law No. 117 of 1983” and it’s Implementing Regulations]

Ministry of State for Antiquities (formerly, the Supreme Council of Antiquities) 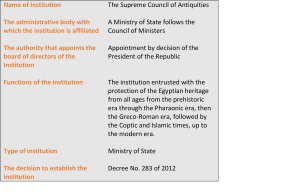 The Supreme Council of Antiquities (SCA) is the institution entrusted with the protection of the Egyptian heritage from all ages from the prehistoric era through the Pharaonic era, then the Greco-Roman era, followed by the Coptic and Islamic times, up to the modern era.

Before the revolution of 2011, the SCA was subordinate to the Ministry of Culture, but now it has separated from the Ministry of Culture and turned into a ministry with a legal personality (Ministry of State for Antiquities).  The Ministry performs its tasks either individually or in cooperation with national or global bodies and institutions. In order to achieve its objectives, the SCA formulates and implements all policies relating to archaeological sites; the SCA issues the necessary permits and general procedures for excavations, restorations, and maintenance. Additionally, the SCA documents and studies archaeological sites and artifacts and manages a comprehensive system for museums at the national level. The SCA also oversees the publication of magazines and books on archaeology and cultural heritage. It funds its own excavations and related documentation and restoration processes.

The Ministry of Antiquities’ Mandate and Functions

The Ministry of Antiquities’ Authorities

The Council’s Affiliation, and the Mechanisms for Selecting and Appointing its Board of Directors

Before the revolution of 2011, the Supreme Council of Antiquities fell under the Ministry of Culture, but now it has separated from the ministry and converted to a ministry with its legal personality (Ministry of State for Antiquities), and it follows the Presidency of the Council of Ministers. The Minister of Antiquities is appointed by the Prime Minister.

The Ministry consists of six sectors, covering all administrative, financial, legal, technical, engineering and scientific requirements. The six sectors of the Ministry are:

The most important projects and programs related to urban development

Areas and buildings targeted by the Ministry

The declaration of owning an archaeological real estate and registering it by its owner, in accordance with the provisions of Article (12) of Law No. 117 of 1983, ensures the following obligations, without prejudice to the right of the owner of an artifact to fair compensation: