WORKSHOP | The Role of Local Initiatives in Urban Development

Local initiatives have the potential to empower the civil society to participate in upgrading the urban environment. They are successful in utilizing local resources and networks to develop a real understanding of their community needs. As such, they have been able to compliment government efforts to effectively serve their communities. Unfortunately, many of the success stories of these initiatives are unknown outside of their communities, which limits the spread of these experiences on a larger scale.

The TADAMUN team organized a workshop to present the experiences of local initiatives across Egypt in the urban development field. The workshop brought together local initiatives with urban experts, academics, urban activists and representatives from donor entities.

The goal of this workshop was to create a platform for these initiatives to share their experiences and facilitate collaboration opportunities. Through an interactive session, the attendees addressed questions related to the future of these initiatives and their ability to have a sustainable impact in the midst of current urban practices.

The ‘Public Coalition in Arḍ al-Liwa’ (al-I’tilāf al-Sha`bī bi-Arḍ al-Liwa) started as one of the many popular committees (ligān sha`biyya) that formed organically during the revolution. Realizing the power of the collective, it transformed into I’tilāf Arḍ al-Liwa, a community group that upgrades and develops the services in the area. They were able to use modest resources to apply pressure on the government to secure community demands.

They have been operating as an unregistered entity with no political affiliations, but partnered with different political parties for projects. Its activities developed from protests into coordinating with governmental institutions and universities to develop realistic solutions to problems facing their neighborhood.

In their talk, I’tilāf Arḍ al-Liwa presented some of their projects and achievements in the area, as well as the bureaucratic red tape and difficulties they are facing in obtaining usage rights to develop Arḍ al-Ḥurriyya (a parcel of agricultural land located along the edge of Arḍ al-Liwa facing Muhandisīn neighborhood, and owned by the Islamic Endowment Authority) to a beneficial community public space. I’tilāf Arḍ al-Liwa also discussed the obstacles facing their group and the reason behind the decision to formalize into a registered association.

“We are more influential and effective than local government, and more representative of the community.”

The ‘Khayrallah Lawyers’ Association for Defending Rights and Liberties’ (Rābiṭat Muḥāmiyīn Khayrallah lil-Difa` `an al-Huqūq wal-Ḥurriyyāt) is a result of an intergenerational, 30-year community struggle against state forced eviction and demolition. The Khayrallah community won an unprecedented court case against the Cairo Governorate and other governmental entities, which is currently being taught in the Schools of Law. Although they secured a verdict in their favor in 1999, the battle is not over, as the verdict is yet to be executed and the residents continue to be harassed by authorities.

This talk starts with a brief history of `Izbet Khayrallah’s legal struggle to secure land rights and the institutional hurdles they face in implementing the court verdict. As an informal settlement, `Izbet Khayrallah faces severe lack of public services as well as administrative problems, such as the absence of representation in the Local Popular Council and the inability to form collective pressure on local councils, as the area falls under four different administrative zones. As such, at times residents had to resort to providing some essential services through communal efforts. The speaker closes with the association’s future plans to develop more legal resources and initiate a legal center to support communal issues.

“The district does not even recognize us as an area. We get our legitimacy from the residents.”

Mīt `Uqba in the `Agūza area is one of Gīza Governorate’s oldest communities, however it is underdeveloped and marginalized compared to the neighboring upscale  Muhandisīn. The ’Mīt `Uqba Popular Committee‘ (al-Lagna al-Sha`biyya li-Mīt `Uqba) emerged from the revolution’s spirit of recognizing the importance of individual participation and demanding rights. Since its inception, not only did they develop their community, they also coordinated with other communities in Cairo and Gīza to share their expertise in community development.

This talk highlights several of the Committee’s success stories, such as lobbying local officials and coordinating with different stakeholders to extend natural gas lines to the area, and developing a plan with local officials and urban experts to maximize the benefit of the budget allocated for paving the streets of the area. To promote a better relationship between local communities and the government, they empower residents and raise their awareness of their rights and how to address concerns with local government. The talk concludes with a brief about the participatory approach used in the development of Silvana Square – a public open space in Mīt `Uqba.

“Participation is key. Knowing your rights, what to do and where to go.”

“We discovered that the previous local representative was benefiting from our dependence on the gas cylinders and was stalling our connection to the natural gas network.”

“The government pressures popular committees to formalize their status so it can restrict their operations.”

‘Save Alex’ is an independent activist group that believes in citizens’ obligation towards their urban environment. Save Alex promotes the preservation of Alexandria’s architectural heritage against demolition, and construction violations, many of which are unsafe structures. One of its missions is turning heritage preservation from an elite issue into a public matter. Its approach has become a source of inspiration to heritage conservation groups across the country.

The talk highlights some of the heritage buildings that were facing demolition over the past year and the group’s success in halting demolition in some of the cases. The group showcases their various activities that range from protests against demolitions, empowering residents to document and report construction violations in their area, to engaging with local residents and promoting their cause in national and international conferences. The talk concludes with the group’s future initiatives.

“The danger now is that the construction violations are creating illegal, unsafe buildings that risk collapsing.”

“Preservation is more than an elite issue; destruction of heritage is a symptom of corruption and unregulated development.”

The ‘Better Life Association for Comprehensive Development‘ (BLACD) embarked on a mission to improve the quality of life for residents in the Eastern Nile Bank (Sharq al-Nīl) of al-Minyā Governorate, where 80% live in inadequate and unsanitary houses. BLACD’s ambitious “Local Housing Movement Program” addressing these issue started years ago aiming at addressing housing, unemployment, ignorance, and poverty through a holistic approach and implementing environmentally sustainable principles in their participatory rural development projects. The Program’s rehabilitation and community empowerment methodology won the 2010 World Habitat Award and other development associations adopted it as a model for future development projects.

This talk showcases their integrated community development approach to socially develop this community and upgrade its rural built-environment. They empowered the community women to support and promote social rights, developed the skills of the local workforce, and partnered with the private sector. The steps taken to ensure the sustainability of the project, economically and environmentally are discussed. The speaker also discusses the obstacles that faced the project as well as its achievements.

“It is important for marginalized communities in rural areas to know their rights, not just fulfill their basic needs.”

Talk 3: Together Association for Development and Environment (Beni Suef)

‘Together Association for Development and Environment‘ conducted a comprehensive urban development project in the poorest Markaz in the country – al-Fashn (Beni Suef Governorate). Their goal was to rehabilitate an existing village into an environmentally and economically sustainable village and engage the community in the process. The project’s biggest success story is the design and construction of an efficient, cost-effective and environmentally friendly integrated sanitation system at a sixth of the cost of conventional ones.

This talk discusses some of the obstacles that faced the project, such as initial resistance from the locals and physical environmental restrictions that had to be accounted for in the designs. The project designed and constructed houses, bakery, nursery, and other facilities, with the community participating in all phases and taking ownership and pride. This project came out with valuable experiences that can be duplicated on a large scale in the development of other informal and rural areas.

“Decentralized water treatment facilities are the solution for Egypt’s 55,000 villages without sanitary sewage.”

“It is important to create an economically sustainable and feasible example instead of only talking about (housing and sanitation) rights.”

Sameh Seif, Together Association for Development and Environment 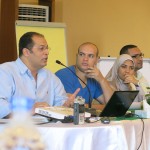 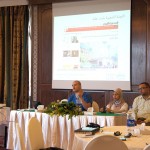 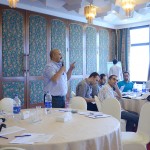 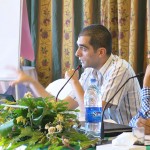 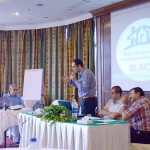 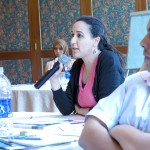 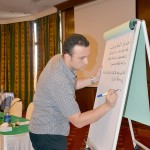 Mohamed A. Dissouki, Save Alex 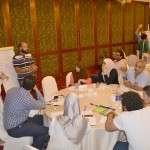 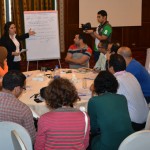