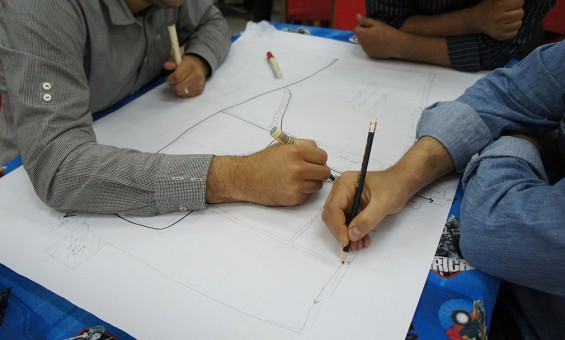 The purpose of the community workshops is to develop an understanding for different neighborhoods in Cairo from the perspective of those who know it the best; its residents. The community workshops start with a brief introduction of TADAMUN project that also showcases success stories of some local initiatives. The participants are then divided into small groups and are asked to draw a map of their area. No instruction is given to influence the type of information or format used. The groups are then asked to comment on their own maps to highlight the following:

The community mapping exercise illustrated the residents’ unique perspectives of their area. Although participants drew maps with varying scales, it was obvious that there were common information throughout, such as: main roads and especially the impact of the Ring road on the revitalization of the area, entry points, historic landmarks (like Al-Saba’ Banat, `Istabl Antar and others), the vacant disputed land, the abundance of wood and marble workshops, and the only public school in the area (Huda Sha’rawy elementary school).

Despite the similarities mentioned above, each map portrayed different information with different perspectives. One map had a holistic view of the area, focusing on road networks, and population density across the area, and they clearly pointed out the locations of NGOs and religious institutes. A second group had the same road networks but decided to focus on the location of residential and business areas, particularly the wood and marble workshops. Another map had a healthcare theme, locating pharmacies, waste deposit locations and the limited green space in the area. Other groups relied on verbal explanations instead of visual representation. One group had a distorted perception of street orientations and the geography of the area and focused on the two main roads only; from the lack of detail in their map one can assume that they are only familiar with their immediate areas.

Most participants pointed out similar qualities and problems in the area. The most cited best qualities were social cohesion and absence of sectarianism in the community, and the activities of numerous NGOs that provide many services to the area’s residents. People acknowledged the area’s central location and the availability of transportation facilities to different parts of Cairo. `Izbit Khayrallah incorporates a large number of small and medium enterprises; as the informal nature of work in the area and low operation costs is attractive to many entrepreneurs. Participants also highlighted the availability of several markets, and appreciated not having to travel far to purchase their daily goods.

The problems facing the residents of `Izbit Khayrallah were summed up by one participant, who explained that the marginalization by the government is the cause of all their problems. This is manifested in many ways, such as the absence of ambulance, police, fire department and healthcare units in the area, and the lack of waste pickup services. This forces them to rely on neighboring public facilities such as those in Dar Al-Salam, which are already at full capacity serving their own residents. The narrow, unpaved streets do not allow for private vehicles to park, which contributes to difficulties of mobility inside the area. Residents also face high unemployment and school dropout rates, which result in drug abuse among the youth. Workers also face unsafe working conditions in the wood and marble factories and workshops, which contribute to their suffering from chronic diseases.

If I were the District Chief, I would…

At the end of the workshop, participants were asked what would be their priority if they were the District Chief. Below is their collective action plan to solve their area’s problems:

Many participants were aware of the limited power that the position of the district chief has, and that solving the area’s problems need the backing of a higher position.