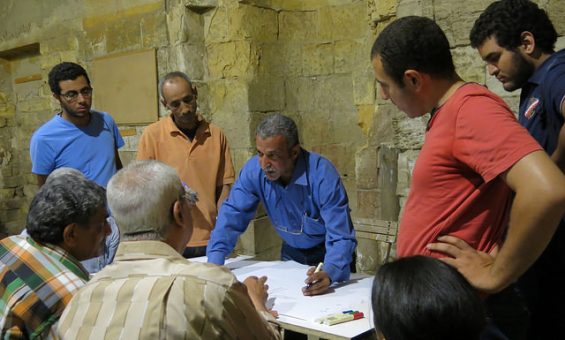 The purpose of the community workshops is to develop an understanding of different neighborhoods in Cairo from the perspective of those who know it the best: their residents. The community workshops start with a brief introduction of TADAMUN and a showcase of success stories of some local initiatives. The participants are then divided into small groups and are asked to draw a map of their area. No instruction was given to influence the type of information or format used. The groups were then asked to comment on their own maps to highlight the following:

This community workshop was conducted in partnership with Megawra Built Environment Collective.

Residents started by identifying the boundaries of the area; Ahmed Ibn Tulūn mosque was considered the entrance of al-Sayyida Zaynab on the North Western boundary, Ayn al-Ṣīra marking the start of al-Sayyida Nafīsa and Miṣr al-Qadīma to the South, and lastly al-Bibānī Kabab Shop on the entrance of al-Darb al-Aḥmar to the North. The maps produced by the residents differed in scales and focal points. While one map showed the whole al-Khalīfa district, one focused in particular on Darb al-Ḥosr, the entrance to al- Khalīfa from the North East, which starts from al-Rammāḥ mosque and extends to al-Bibāny Kabab Shop, and the third group which had a big number of children mainly focused al-Ashrāf Street. Al-Ashrāf Street, often called al-Khalīfa Street, was identified as one of the main streets connecting the area to al-Sayyida Nafīsa to the South with many commercial activities and iconic mosques.

Most of the residents used local services to mark and identify the different streets; they mapped schools, bakeries, grocery stores, coffee shops and pharmacies. al-Maghrabī Hospital and Mubarāk hospital and the squares of al-Sayyida Nafīsa, al-Sayyida Sakīna and al-Sayyida Ruqayya were identified as important landmarks. The residents mentioned a planned youth centre to be built in the area by al-Athar Linā NGO, which they are looking forward to, as such a space is currently missing from the area. The maps have showed a great level of detail, particularly with regards to commercial activities, reflecting the residents’ good knowledge of the area.

An argument ensued when one of the residents referred to a street by its common name, al-Zarāyib [cowshed/stable], which has negative connotations in Arabic. An older resident, thus, thought it was an inappropriate representation of the area that conveys a negative image and urged the other residents to refer to the street by its official name, Badr al-Dīn al-Yūnānī.

The Best and Worst Places in Al-Khalīfa

All the maps featured al-Ashrāf street which residents consider to be one of the best places in their area along with al-Manshiyya area, which encompasses the famous al-Sultān Hasan and al-Rifā’ī mosques. On the other hand, the places the residents considered dangerous included al-Darb al-Masdūd, al-Qabr al-Tawīl, and al- Zarāyib which are known to be places where drug trade and illicit activities are active.

The three groups pointed out similar qualities and problems. Men, women and children agreed that there is a good range of amenities in al-Khalīfa with a number of primary schools, multiple bakeries, grocery stores, pharmacies, and a vegetable market. One of the participants noted that at any time during the day or night one could get anything they are looking for. The idea of accessibility is expressed by another participant when he claims “Al-Khalīfa is the gem of Cairo” referring to its central location with multiple transport links and connections, easing entry and exit from the area.

The other important quality mentioned by all participants was the social cohesion, and sense of community experienced in the area. The residents of al-Khalīfa have lived there for generations and feel connected through a shared history. This fosters the feelings of safety and solidarity amongst the residents. As one resident explained, in al-Khalīfa neighbors don’t wrong eachother, and if this should occur then they are held accountable to their respective families. However, many have noted that with new comers entering the area, and particularly after the January 25th Revolution, the order has been disturbed and the sense of community has been undermined.

Lastly, the residents are proud of the area’s history, and its monuments, and historic sights. One participant proudly exclaims al-Khalīfa hosts 99 minarets in one district which is an attraction no other district in the city can claim.

The problems facing the residents of al-Khalīfa are varied in nature. One of the biggest problems that emerged during the discussion was the inadequacy of health facilities in the area. While there are doctors, there are no specialized clinics and the only hospitals are located outside of the area, with the closest being Ahmed Maher and al-Munīra hospitals. Additionally, while the presence of multiple primary schools in the area was mentioned as an advantage, there are no preparatory or secondary schools in the area and students have to go to schools in neighboring areas. A young mother also complained about the lack of child care facilities in the area.

As is the case in other areas of Islamic Cairo, al-Khalīfa suffers from the dilapidation of its buildings with many buildings on the verge of collapsing, and the decay of water and sanitation infrastructure making water access irregular and insufficient. The poor structural conditions of the area make it difficult to connect it to the natural gas network, which places a financial burden on the residents who pay up to EGP 50 for a gas cylinder.

A problem that was raised in one of the working groups, which was mostly composed of women and children was the proliferation of qahwas [traditional coffee shops] in the area. They complained that many of them in the area remain open until the early hours of the morning creating high noise levels, with little to no regard to residents in the area. According to participants, coffee shops used to serve as meeting points for people, whereas now they are used as drug dens where fights often erupt, undermining the comfort and sense of safety residents always enjoyed in the area. Drug sale and use has been reported as a problem that became evident in the aftermath of the 25th of January Revolution, however, residents reported that improvements in law enforcement have been made in the last few years.

The residents complained about the spread of illegally-built apartment buildings on the outskirts of al-Khalīfa which blocked their view from important monuments, such as the citadel. According to the workshop participants, building codes in Fatimid Cairo specify building heights to be no more than three floors and as such they demand the extra floors from the newly built apartments to be removed. Similarly, they demand stricter law enforcement inside the area. The residents are bothered by the proliferation of street vendors and think all selling activities should be confined to the market place.

In a passionate speech, one of the area’s craftsmen, complained about the dismal state of the area’s historic monuments. He claims the state and the people don’t realize their values and don’t work towards their preservation. The value of those sites is further undermined by the proliferation of informally-built houses in the area which block the residents’ view and distorts the beauty of the landscape. One resident exclaimed that their area has disappeared from the neglect and the informality surrounding it.

The residents had a number of ideas for restoring the beauty of the area such as removing the informally-built houses, or fencing the cemeteries surrounding al-Khalīfa. They then pointed out that there are a number of unused empty spaces in the area which are currently used as a waste dump that could be cleared to make room for other uses of the space, such as market spaces with clear boundaries or youth centers and clubs.

If I were Head of the District, I would…

At the end of the workshop, participants were asked what would be their priority if they were the head of the District. Below are the participants’ highest priority issues which they would tackle to solve their area’s problems: