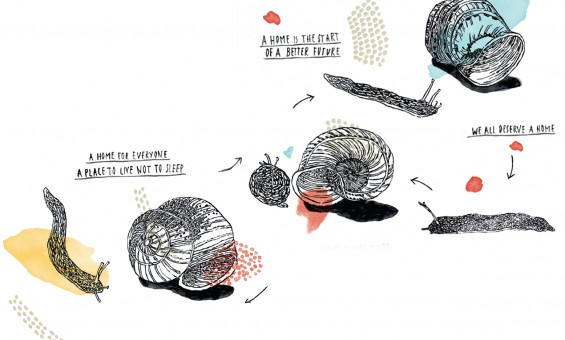 The Right to Housing

What is the Right to Housing?

The right to housing is the right to live somewhere in security, peace, and dignity. According to the United Nation’s Office of the High Commissioner for Human Rights, it includes protection against forced evictions or arbitrary destruction of one’s home, the right to be free from interference in personal and family matters in the home, the right to choose where to live and to move freely from one place to another. The right includes entitlements to security of tenure; housing, land, and property restitution; equal access to adequate housing; and participation in the decision-making process related to housing issues at all levels of government.

Adequate housing must include more than four walls and a roof. It must also include access to water and sanitation services, garbage disposal services, and energy for cooking, heating, lighting, and food storage. It must be affordable, physically sound, sufficiently spacious, and provide adequate protection from the elements. It must take into account the needs of disadvantaged and marginalized groups and respect the cultural identity of its inhabitants. Finally, it must be located in physically and environmentally safe areas that are close to employment opportunities, health-care facilities, schools, and other social facilities.

The right to adequate housing was first recognized under the right to an adequate standard of living in the 1948 Universal Declaration of Human Rights. The 1966 International Covenant on Economic, Social and Cultural Rights, the foundation of the right to adequate housing, refers to “the right of everyone to an adequate standard of living for himself and his family, including adequate food, clothing and housing, and to the continuous improvement of living conditions” (Article 11). Several other international and regional human rights treaties mention the right to housing. Egypt is a state party to several of these including the 1951 Convention relating to the Status of Refugees (art. 21), the United Nations Convention on the Rights of the Child (1989), the International Convention on the Protection of the Rights of All Migrant Workers and Members of Their Families (1990), and the African Charter on Human and Peoples’ Rights (1980).

What Isn’t the Right to Housing?

A landmark case that began to outline the obligations of governments to enforce the right to adequate housing came in 2000 with the case of Grootboom vs. the Government of South Africa. After the end of apartheid and wide public participation in the drafting of the South African Constitution, the right to adequate housing was guaranteed in the new constitution. As part of their plan to fulfill that right, the South African government had an aggressive building program in place to provide more housing.However, a group of citizens (Irene Grootboom among them) living in squalid conditions while waiting for the construction of public housing brought a suit against the government to provide temporary housing and public services during the interim period.

The South African High Constitutional Court (CC) found that the State’s obligation to fulfill the right of access to adequate housing does not have to be met through direct provision of shelter to those without it, but through “reasonable legislative and other measures, within its available resources” (South African Constitution, Section 26(b)). The CC lauded the accomplishments of the government’s housing programs, but found that they ignored the short-term needs of the very poor in the interests of medium and long-term objectives. “A program that excludes a significant segment of society cannot be said to be reasonable” (Grootboom 2000, 34).   A “reasonable” program must make provisions to provide relief to those individuals living in intolerable or crises situations (Grootboom2000).

The Grootboom ruling is important because it differentiates between those who can afford to acquire adequate housing and those who cannot.  For those who can afford to pay, the state’s obligation lies in providing access to housing stock and implementing enabling legislation to make finance more accessible and changing master plans and zoning ordinances to allow for the safe construction of homes.  For those who cannot afford to pay, the State’s obligation depends on context.  Some citizens may require access to land, others access to building materials or finance, others may need access to water, electricity, sewers or roads.

The right to housing and the protections against forced displacement do not prevent governments from acquiring land for public use, however it places restrictions on the process through which these projects are carried out.Governments are obliged to involve the affected population in the decision-making process, to fully consider their needs, and minimize the scale of displacement.

The Right to Housing in Egypt Today

The 2012 Egyptian Constitution guarantees the right to housing in Article 68.It reads:

The state adopts a national housing plan, its basis in social justice, the promotion of independent initiatives and housing cooperatives, and the regulation of the use of national territory for the purposes of construction, in accordance with public interest and with the rights of future generations. [1]

Housing experts have raised several objections to this article: 1) it is generic and vague and does not address Egyptian housing, but rather conforms to international conventions to which Egypt is already party (see above), 2) it does not list the standards of adequate housing by which to measure the fulfillment of the right, and 3) it does not mention the government’s obligation to citizens who cannot afford adequate housing. Egypt will continue to need to seek innovative strategies to implement “adequate housing” and dialogues must begin with affected constituencies, experts, civil society, and government officials to devise immediate plans to confront this difficult challenge.

Since the 1980s, the central government has pursued a policy of deconcentration for Cairo, building 20-40 new desert cities (in various stages of development) on state-owned land. These desert cities were intended to function as centers of industry and absorb the majority of Cairo’s population growth. However, they were often ill-conceived land-grabs by the well-heeled and military elite and the projected population growth has failed to materialize, further exacerbating the housing situation in the region. Further, much of the development in these new cities, which promise security, tranquility, and less pollution, cater to upper-class residents and ignore the needs of the lower and middle class residents. Many of these new cities are largely vacant because of land speculation and over-supply.

The government, at times, has used forced evictions to relocate residents to peripheral areas of the city without any amount of citizen consultation or participation in the process. These evictions were not only unpopular and a violation of human rights, but they have done little to stem the flow of migrants to the center of the city. This approach ignores the social aspects of informal settlements and the culture of the sha`b, where neighbors are sometimes willing to sacrifice their personal needs for the benefit of the neighbors or the needy.The street culture in sha`bi areas is central to the vibrancy of these areas—weddings, funeral customs, working, playing, socializing, and commerce are all tied to these public spaces and social capital, which are destroyed when communities are displaced to other areas.

What Can Be Done to Realize the Right to Adequate Housing?

The first step for the government is to recognize the significance of the informal areas of the city, the assets communities in these communities, and help these communities continue to improve their living condition. These settlements include the middle class as well as the poor and collectively, they have invested billions in their communities and continue to improve them. Rooftops, building entrances, stairwells, and restricted access residential streets are managed by the communities. The public streets with vehicular access, for which informal areas get their bad reputation as “uncivilized” or “dirty,” are beyond the scope of the community to maintain. It is these transportation arteries, which constitute just 20 percent of public space, that require the attention of the state.

There are many countries throughout the world that guarantee the Right to Housing in their constitutions. We recognize that there are many questions as to the role of the government in providing housing to the population. Should they build housing themselves as under the 2005 National Housing Program for Youth, an approach that is unlikely to keep pace with growing demand? Should the government provide subsidies to private developers to build affordable housing? Or should the government intervene in the mortgage market to allow residents to leverage the necessary capital to build their own homes? Saddling the lower classes with debt will likely do little to improve their housing situation if they do not have the income to sustain themselves through the life of the loan.

The Right to Housing is difficult to fulfill and touches on every other major aspect of urban governance. However, it is the bedrock of a socially just and sustainable society.

Constitutional Court of South Africa. 2000. Government of the Republic of South Africa and Others versus Irene Grootboom and Others.  (11) BCLR, 1169 (CC).http://www.saflii.org/za/cases/ZACC/2000/19.pdf