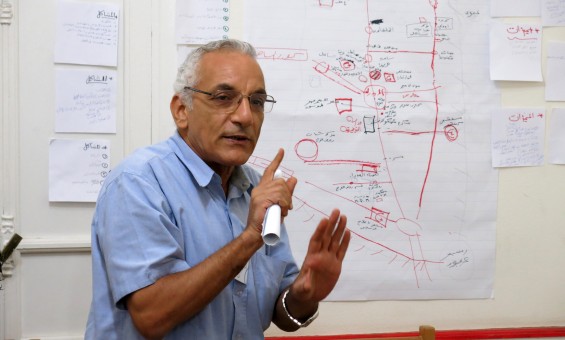 We live in our cities unaware of how planning decisions are made, how resources are allocated and on what basis, or even who is responsible of making these decisions. Whenever an urban issue arises, residents enter a labyrinth of bureaucracy just to know who to address their grievance to, not to mention what channels to take in order to have it solved. In theory, city planning and management is undertaken with the ultimate goal of increasing the well being of residents, but our realities often tell a different story. This brief will take a look at urban planning and management legislation and practices and how they connect with rights addressed in previous briefs in an effort to set a legislative framework that can bring us closer to cities and towns that are planned and managed to truly represent the priorities and address the needs of its inhabitants.

What is the Right to Planning and Management of the City?

Citizens have the right to participate in the process of planning, approving, managing, and evaluating public policies, development plans, and budgets that influence the current and future development of their city. This right enables them to propose legislation to the government about the planning and management of the city through popular initiatives and their representative institutions. It obligates the state to hold conferences, public hearings, consultations, and debates to ensure citizen input in urban development planning. It is the obligation of the state to implement policies against corruption, promote transparency and accountability at all levels of government, and institutionalize public participation.

Citizens cannot participate in the planning and management of their cities without having access to public information about development projects, without the right to publicly participate in strong democratic institutions, or debate and hold officials accountable in public forums. The right to planning and management of the city is the foundation for ensuring equitable and sustainable urban development across our cities.

What is the Impact of the Right to Planning and Management of the City on our Everyday Life?

Urban planning sets the vision for the future of our communities and sets a path to get there. This vision should be collective. The people should be at the forefront of setting their cities’ development agendas. Urban management guides the process through which these plans are realized. The government can ensure equitable and sustainable urban development by implementing real participation of all citizens, especially affected poor and marginalized citizens, in both the development of city plans as well as the management of its services and resources.

Legislation stipulates the involvement of local units and Local Popular Councils (LPCs) in setting urban planning needs and priorities on the local level with the cooperation of representatives from civil society and residents as well consulting with them on the general strategic plan for the year (Building Law 119, Article 11 and 12). The problem is not the lack of legislation, rather it is the absence of political will to create laws which will lead to substantive residential and civil society participation and representation. The state should also encourage and solicit public awareness of the community’s right to play a significant role in urban planning and the democratic management of the city. (Read the right to public participation and the right to information to learn more about the problems facing effective public participation in urban planning and management).

Although citizens have few democratic institutions to influence the planning process, residents have already shaped their cities by creating informal communities largely beyond the state’s planning and management practices. Informality is a fact of life in Egypt’s cities, with more than half of the residents in Greater Cairo living in informal settlements. For decades, urban planners in the central government have included measures to “formalize,” “regularize,” or tear down these communities in their plans for the city. However, these plans were devised without real public participation as discussed above, resulting in ideas that were at best, inappropriate, and at worst, dangerous. Most urban development plans do not serve the interests of the Egyptian people at large, but a very small slice of Egyptian society who stand to profit from the redevelopment of centrally located areas, the development of desert cities, or the relocation of lower-income communities. These plans often talk about the positive impact on investment, the economy, and the beautification of our cities, but no mention is made of their negative impact on city residents, particularly the deeply-rooted social networks and local economies in low-income and marginalized areas.

The kind of participation that is necessary to realize the right to planning and management of the city is elusive in Egypt due to weak democratic institutions both nationally and locally. Governors are appointed and there are no elected mayors. The central government’s domineering control over the administration, representation, and finances of local government, makes it even more difficult for citizens in cities and towns to have much impact on the formal processes of planning and urban management. Urban planning is best done at the local level. Local governments can be more responsive to citizens if they are given urban planning responsibilities as well as the authority to implement plans or projects they create. This is not to say that national- and provincial-level planning should not take place, but that the future of communities is best cared for in the hands of its residents, not central government employees or private sector builders.

Cities, towns, and villages depend on the central government for more than 85 percent of their funding. These budgets are determined by the central government or appointed officials and are not available for the people to examine, comment on, or try to improve. The elected representatives of the Local Council only have the right to suggest changes to these budgets. Local budgets that are determined by local authorities with the input of residents can better address the priorities of the local population.

Effective public participation in planning and urban management is impossible without citizens having access to public information. In public decision making, knowledge is indeed power and the Egyptian government exercises their power by withholding information from the public. Balanced conversation between citizens and the government depends on a comprehensive understanding of the issues at play, public resources available, administrative procedures, and actors involved.

In Egypt, there is too much distrust of the government, due to the government’s poor record of serving the public interest, its secretive nature, and its weak commitment to representation, transparency, participation, and political freedoms and rights. An opaque mode of government breeds corruption and patronage networks where the benefit of the powerful few can override public interest without fear of accountability.

Planning and Management of the City and the Egyptian Constitution

Historically, the Egyptian Constitution did not recognize citizens’ right to be involved in the planning and management of the city explicitly and the 2013 draft Constitution is no different. It does however address citizens’ right and duty to participate in the public sphere. The 2013 Egyptian draft Constitution Article 87 states that “The participation of citizens in public life is a national duty,” but limits participation to “the right to vote, run in elections, and express their opinions in referendums.” However, as mentioned earlier, Building Law 119 (2008) that regulates urban planning and construction practices, stipulates the involvement of the local administrative unit, LPC and representatives of the civil society and local residents in setting local urban planning needs and in finalizing the annual general strategic plan.

The 2012 Constitution was the first Egyptian legislation to recognize the right to information. The 2013 draft Constitution, Article 68 obligates the state to make information available to citizens, however it does not outline the mechanisms to access information or the grounds for determining information which will not be publically shared on “national security” grounds. In a country like Egypt, where many, if not most, mega projects are related to the military in some way, this ambiguity may impede access to the plans and budgets of these projects.

Planning and urban management is enshrined in many constitutions throughout the world as both a right and obligation of citizens to participate in public life. The right to planning and management of the city cannot be realized without the right to information and the right to public participation. Bolivia has exemplary constitutional articles (2009) pertaining to both rights. It obligates the state to “create spaces of participation and public monitoring” (Article 241.VI) and to “guarantee the creation, organization and performance of a participatory planning entity that includes representatives of the public institutions and organized civil society” (Article 317). To avoid any potential conflict from ambiguity, the Bolivian Constitution breaks down social participation and control into ten channels including “generat(ing) a transparent handling of the information and the use of resources in all areas of public management” and coordinating the planning and control functions of the state (Article 242).

Article 50 of the 1990 Yemeni constitution guarantees the right of citizens to “submit their complaints, criticisms, and suggestions to the various government offices directly or indirectly.” Article 14 of the newly adopted Moroccan constitution (2011) guarantees the rights of citizens to “submit legislative proposals” in accordance with the law, providing a space for active citizen engagement in a government that was traditionally closed to citizen input. Morocco, Kenya, and India (among many others) guarantee the right of access to public information. Thailand’s constitution (1997) Article 57 links the public’s right to information to the approval of development projects, stating that,

A person shall have the right to receive information, explanation and justification from a government agency… before permission is given for the operation of any project or activity which may affect the quality of the environment, health and sanitary conditions, the quality of life or any other material interest concerning him or a local community and have the right to express his opinions on such matters to the concerned agencies for their consideration…

Thailand requires the state to “organize public consultation thoroughly before the making of social, economic, political and cultural development plan, the expropriation of immovable property, the making of town and country planning, the determination of land use, and the enactment of rule which may affect the material interest of the public” (Article 57). Cape Verde’s 1992 Constitution obligates the state to create the suitable environment for the realization of economic democracy through “the participation of different social and economic groups, through their representatives and organs of local administration in the process of conceiving, approving, implementing and evaluating development plans” (Article 88.2).

The right to planning and management of the city empowers citizens to take ownership of their city and proactively take steps to improve their conditions and ensuring that state resources are properly allocated to serve public needs. There are several ways that a constitution can provide a sound foundation for planning and urban management rights.