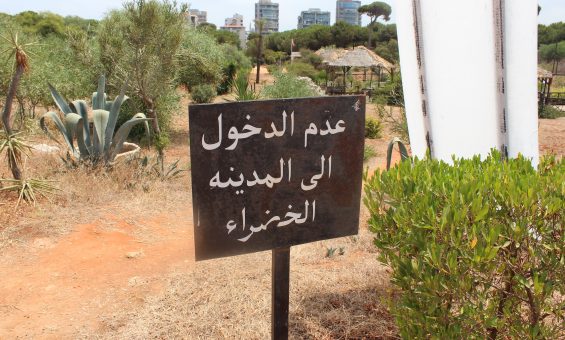 Community Organization and the Fight for Public Spaces in Beirut

Public spaces have important social, economic and environmental values. Their presence is crucial, especially in urban areas with dense populations. Within Beirut, a lack of basic services and a waste management crisis, has caused many groups of activists to emerge, reclaiming their basic rights, amidst an atmosphere of political distrust. In particular, the issue of Beirut’s shrinking green and public spaces sparked outrage among civil society groups. The fifteen years of the Lebanese civil war (1975-1990) inhibited the life of its public spaces and affected their evolution. Vulnerable and unpleasant during the war, these public spaces were also neglected during the post-war period since other urgent priorities related to reconstruction and infrastructure were set. Today, amidst a dense concrete building jungle, very few spaces in the capital Beirut are designated as public. In addition to being scarce, they are often inaccessible or privatized. They consist of 49 public gardens and squares (Shayya 2010), as well as a fragmented waterfront appropriated by private interests.

Since the municipality is unable to provide the city with its much needed public space, many activists were fighting for public rights and had to step up and do the job of the municipality. The activists consist of individual and group initiatives, university professors, environmentalists, and community organizations, such as the The Civil Campaign to Protect The Dalieh of Raouche, Legal Agenda, Green Line, Nahnoo and Beirut Madinati among many others. Through engaging in initiatives revolving about public spaces, these activists have certainly been involved in shaping the future of these threatened commons, as well as raising awareness about them. Such public space activism initiatives in Beirut have relied on a range of community organization mechanisms, including discussion panels, public debates, artistic displays, petitions, campaigns, protests, strategic litigation, and lobbying. The role of the activists was crucial in creating a dialogue with authorities, developing alternative visions for the public spaces and revealing corruption. This article examines three types of public spaces that have been at the heart of the current public space debate in Beirut, the case of the biggest public park, Horsh Beirut, as well as two sections of the waterfront Dalieh of Raouche and Ramlet el Baida. We look at how activists created a new platform for behavioral change through participating in public life and advocating for public spaces in Beirut. 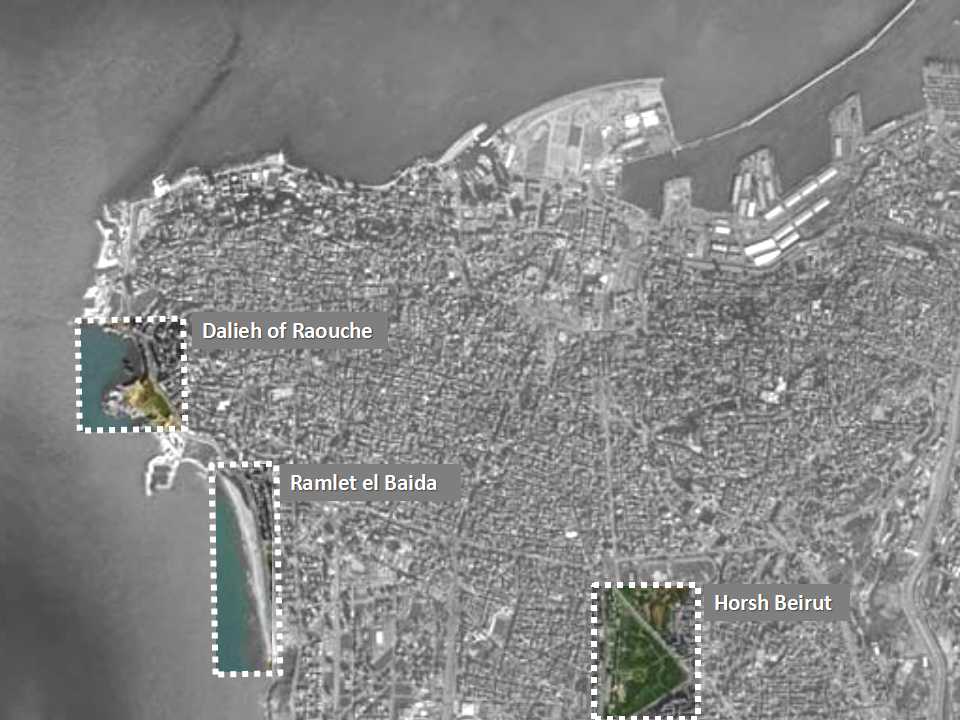 ACCESS TO PUBLIC PARKS: THE CASE OF HORSH BEIRUT

In 2015, the percentage of green spaces in Lebanon has gone down to less than 13% (The Daily Star 2015). While the World Health Organization recommends a minimum of 9 m2 of green space per capita (UNHABITAT 2016), Beirut has only 0.8 m2 (Ayoub 2014). Horsh Beirut, also known as Horsh el Sanwbar or Pine forest, is the biggest public green space in Beirut, covering an area of 400,000 m2. The history of development of the city of Beirut has always left traces and marks on this park, which area has been continuously shrinking since the 20th century. For more than 20 years, this urban park has been closed to the public. Prior to June 2016, only Westerners and well-connected people were allowed to stroll in the park. The main arguments justifying this closure included security since closing the park would avoid turning it into a space of conflict between individuals of different religions and political views (The Daily Star 2015), as well as protection from uncivilized behavior or abuse (Nash 2014). A coalition of 20 NGOs worked for more than two years through street campaigning, awareness raising and liaising with government officials, and was able to get the approval of the municipality and the governor of Beirut to open the park. The park opened first as part-time, while it is was completely opened to the public in August 2016 and managed by the municipality. Unfortunately, this success didn’t last for long since the municipality seems to find every opportunity to close the park again and encroach on what remains of it (Farfour 2017). Today, while the park is closed, again, activists are reclaiming back their rights to access and reopen the park and are fighting against multiple encroachments currently happening. Even though the park is zoned as non aedificandi (unbuildable property), the municipal council is attempting to change part of its zoning to allow construction and currently building a hospital on the park’s periphery. A project attempting to move the Beirut Municipal Stadium from Tarik al-Jadideh to be located on the park’s property was also on the list (Farfour 2017).

ACCESS TO THE WATERFRONT: THE CASE OF DALIEH & RAMLET EL BAIDA

Waterfront property is a contentious issue in many cities. In the words of the World Monument Fund, “Waterfront property is in high demand in cities the world over, and its development often comes into direct conflict with public access and the preservation of cultural values” (World Monument Fund 2016). Even though the Lebanese law states that all sandy beaches are public and inalienable (Fawaz 2016), Lebanon’s coastline is being swallowed up by a powerful real estate sector, turning the commons into private enclosures. The waterfront is appropriated by private interests due to development laws that had been passed during the chaos of the civil war (Battah 2015). There are about eight illegal resorts per mile of Lebanon’s 135-mile coastline, many of them owned by senior politicians (Battah 2015). Such developments are possible because “these same public agents seal deals and ratify permits behind the closed doors of ministries, planning offices, and the municipality” (Fawaz 2016). This happened because of (1) contradictions and lack of transparency in public records, (2) many modifications encouraging privatization taking place, in the form of “legal texts and decrees, ratified plans, formal decisions, and/or informal arrangements” (3) laws are issued by the same people governing and investing, so they manipulate it to serve their interests (Fawaz 2016).

In particular, in Beirut, towards the southern end of the corniche promenade, located along an upscale neighborhood, lies two remaining pieces of the coast that are publicly used, threatened by illegal private development plans: the Dalieh of Raouche landmark, as well as Ramlet el Baida, Beirut’s popular sandy beach. Both sites are a source of attraction to many who can’t afford the high entrance prices of privatized beaches. Both sites are part of the Mediterranean coast ecosystem with high environmental impact to be preserved (Chmaitelly 2007, Chmaitelly 2009). Both sites, publicly used but not owned, represent two sides of the same story, the story of a privatized shore. 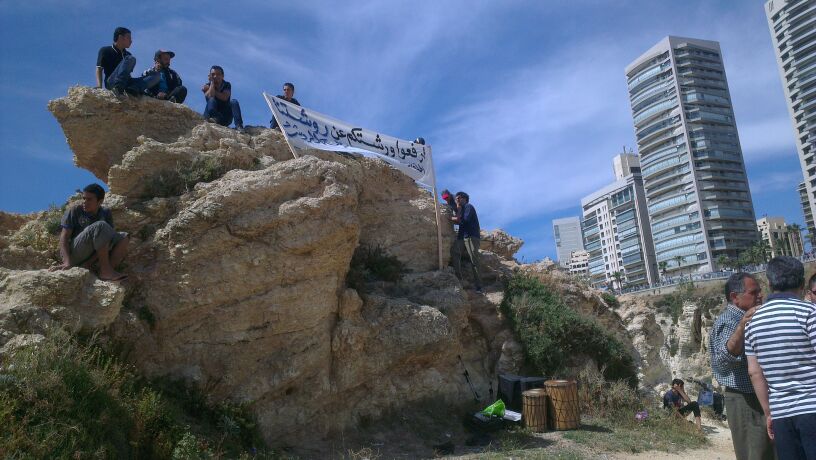 The waterfront is appropriated by private interests due to development laws that had been passed during the chaos of the civil war (Battah 2015). This happened because of (1) contradictions and lack of transparency in public records, (2) many modifications encouraging privatization taking place, in the form of “legal texts and decrees, ratified plans, formal decisions, and/or informal arrangements” (3) laws are issued by the same people governing and investing, so they manipulate it to serve their interests (Fawaz 2016). This applies to the following cases of Dalieh of Raouche and Ramlet el Baida.

Dalieh of Raouche has been used over the years by diverse user groups. It provided sustainable livelihood for many low-income city-dwellers and hosted many cultural activities such as the Kurd’s Nawroz (World Monument Fund 2016). The fight for Dalieh started as soon as plans of turning it into a private luxurious touristic resort designed by the famous Rem Koolhas were revealed (The guardian 2015). The Civil Campaign to Protect The Dalieh of Raouche was then formed by a group of concerned activists. They have succeeded to place Dalieh on the 2016 World Monuments Fund Watch List. Today, although fenced, it is still accessible for people, who are afraid of future projects that might take place in the future.

Ramlet el Baida is a sandy beach around a kilometer away from Dalieh of Raouche. While playing on the beach and tanning in the sun, most users of Ramlet el Baida thought they are on public property, not knowing that they were actually on private land that was once public and had undergone a private conversion through illegal, under-the-table deals over time. In the 90′s, the site was threatened by the development of the NARA project that was stopped following public pressure (Moughalian 2016). After fencing off the beach from the public, cranes started working in November 2016 towards the southern end of Ramlet el Baida on the construction of the Eden Rock resort, a private development developed by Achour Development, planned to be completed in 2018. The company claimed its right to build on the property, but activists initiated a range of activities to stop the privatization of the beach. After filing a law suit against the government to end the ongoing construction and stop the project, the Lebanese State Council issued a suspension of the construction permit for the project in March 2017. However, constructions continued and a petition issued by the “Legal Agenda” demanding the intervention of the Lebanese president through implementing judicial decisions is currently in process. If construction continues and the project is completed, it will be a precursor to a complete takeover of what remains of the Lebanese coast (Dziadosz 2017).

From documentation to action
Both Dalieh of Raouche and Ramlet el Baida had a “preventive” form of activism that was triggered as soon as activists knew of intended projects. Researchers and activists worked on documentation of the seafront through booklets and maps, unraveling land ownership conversion documents and laws governing of the city’s seafront, as well as the different practices of the spaces and their respective users. Activism took also the form of site specific performances exploring access to the sea. They also passed into action through protests and providing alternative solutions.

Activism has surely taken a “multidisciplinary” form within in the case of the protection of public spaces in Beirut. But are they considered success stories? Even though not all the civil society’s actions succeeded in preventing encroachments on public spaces, there is no doubt that the triggered events revolving about public spaces raised awareness among people about issues they weren’t aware of before. The three cases brought up in this article demonstrate that current projects happening on public space (1) threaten social spaces and national landmarks, (2) are being built on property that was partially acquired illegally, (3) serve narrow interests of elite groups, and (4) threaten a unique ecosystem (Fawaz 2016). Indeed, public space is a highly political issue and the fight for it is a dialogue between the state, the city, and the people. Future challenges include prevention of future encroachments, removing the built structures or transforming them for public use, and letting the people involved in the illegal processes take responsibility for their actions and be sanctioned. These spaces are bio-cultural assets, they are crucial to the social, economic and environmental well being of the city and therefore must be preserved, protected and improved. The challenge is also to find alternatives to the usurpation of public spaces by private market-driven interests. It is also important to acknowledge that public spaces are a resource, and not a burden, if managed and protected properly.