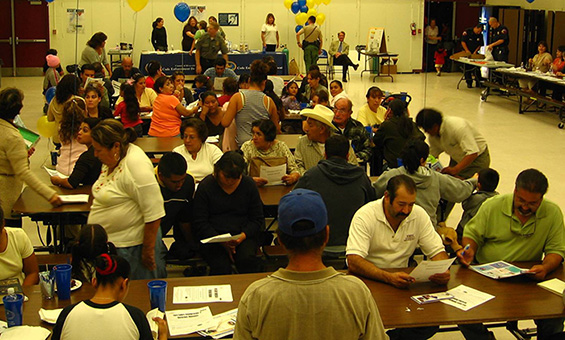 Following the early practices of Participatory Budgeting in Brazil, this concept started spreading in many different countries. Many cities around the world right now engage their citizens in the decision making process about how their cities are managed and how their public budgets are allocated and spent. This article illustrates practices of Participatory Budgeting in some different cities.

Porto Alegre was the first city in the world to implement a participatory budgeting program and is the most replicated.   It took the collaborative efforts of both the citizens and government of Porto Alegre about three years to get the process right, but their efforts have paid off.  After about 15 years, more than 30,000 people participated in PB in Porto Alegre annually.  PB is still an important part of city life in Porto Alegre and is supported by both conservative and liberal parties.

Kerala’s participatory planning initiative (which includes participatory budgeting) started in 1996 as the Kerala People’s Campaign for the Ninth Plan.  Through this initiative, the citizens of Kerala were able to determine how to spend about 40 percent of the state revenues between 1996 and 2001.  Unlike most initiatives which are at a city or district level, Kerala’s was at the state level, covering more than 1,000 jurisdictions from villages to provinces.  Some 60,000 people were trained to administer the program and about 3 million people participated in the process.  Like in Porto Alegre, Brazil, Kerala’s participatory budget movement helped foster a mass movement that has fundamentally altered the way in which the state engages with citizens.  Although political power has changed hands several times in Kerala since 1996, the participatory budgeting process has remained.

An important consideration of the Kerala experience was that it was preceded by an extensive capacity-building phase implemented by leftist governments.  These initiatives included the Total Literacy Campaign, the People’s Science Movement, the People’s Resource Mapping Program and the Kalliasseri People’s Planning Experiment.

The PB process in Sevilla was modeled on the Porto Alegre experience and began in 2004.  The city’s departments of public works, sports, youth, education, culture, environment, health, and gender have all opted into the PB process, allowing citizens of Seville to determine how to spend part of their budget for local projects.   Approximately $17 million of the total city budget of about $1 billion is allocated through participatory processes.

The 49th ward of Chicago was the first jurisdiction in the United States to adopt a PB project.  Each year, the residents of ward 49 determine how to spend about $1 million of public resources.  Since the success of the 49th ward, three other wards in Chicago have also adopted PB as have several other cities in the United States.   Watch a video about PB in Chicago here.

Through PB, residents of eight districts are deciding how to spend more than $10 million of public resources in New York City.  Watch a video about PB in NYC here.

Innovation, Environnement, Développement Afrique helped organize a PB exercise in Fissel, a rural community comprised of 28 villages, that successfully provided a platform for traditionally excluded groups in the area including women, young people, and the elderly.  The process has since expanded to other areas in the country.  IED Afrique (an NGO) has since developed a handbook for the region, which can be found here.

The constitution of Zimbabwe does not recognize local government, therefore participatory budgeting approaches were often ‘bottom-up’ and confrontational rather than the traditional model in which the government acts as the primary driver.   For example, in Marondera in 2002, the government accepted a PB process after entering into ill-advised water and sanitation contracts that resulted in a large amount of debt and hyper-inflation in the region.   In Mutoko, PB began in 2003 after strong and sustained civil society protests.

In 2003, South Africa passed the Municipal Finance Management Act which requires each municipality to publish its budgets and allow citizens to submit comments on it.  Although there have yet to be participatory budgeting processes in South Africa, the Metropolitan Ekurhuleni Municipality focuses its efforts on educating the public through street theater and stage productions about the role of government, its different actors as well as their responsibilities.  They also encourage citizens to comment on the municipal budget through their “budget tips.”

Belo Horizonte was one of the cities in Brazil to model their process after the Porto Alegre model.  They began with district-level PB in 1993, moved to a Housing PB since 1996, and a digital PB (e-PB) in which citizens participate online in 2006.  Residents allocate about $50 million annually in this city of approximately 2.5 million people.

For PB in the Middle East and North Africa region, please visit the PB Coalition.