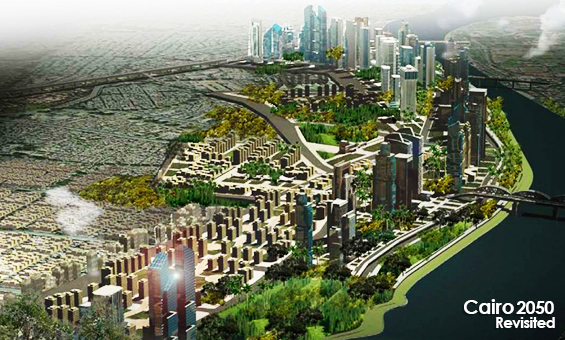 Nobody can deny the daily struggles that citizens of Cairo have to deal with such as deterioration of housing and services, incredibly high population densities, and weak transportation. It is for this reason that Cairo’s planners deemed it necessary to develop a vision and strategic plan that would turn Cairo into a “modern city,” fulfilling the dreams of its citizens. This effort culminated in ‘Cairo 2050′ – a vision for Cairo’s future that was proposed in 2007/2008, and that was situated within a broader national strategic plan “Egypt 2050..”. The vision for Egypt revolved around raising the overall living standards for the Egyptian citizens through things like redistributing the population and developing the countryside rural areas, among other policies. The vision for Cairo depicted the city as full of wide boulevards and green spaces often replacing areas where millions of Egyptians currently live.

Although Cairo 2050 was subsequently renamed and revised, this series of articles will focus on how the logic of Cairo 2050 continues to dominate the way Cairo is master-planned today. This planning logic is manifested most clearly in the official planning regime’s approach to public participation, information, and transparency.

This introductory article will give a brief overview of the history of Cairo 2050 from its inception until its current status, including the initial controversy it faced, and the subsequent revisions that are still taking place.

In late 2007, the Egyptian public began to hear about a new master-plan called Cairo Plan 2020/2050. Not much information was given at the time, but in late 2008 a presentation was made available online that showcased the plan’s details, including a set of projects to be implemented by 2020, and a more general vision of Cairo by 2050. The vision/strategic plan was presented by the General Organization for Physical Planning (GOPP) (at the time headed by current Minister of Housing Mostafa Madbouly) to then Prime Minister Ahmed Nazif. Highlighting the challenges Cairo is expected to face by 2050 if the status quo continues undeterred,the presentation argued that strategic interventions are needed in all sectors if Cairo is to “maximize the effectiveness of Egypt’s regional role on the Arab, Islamic, and African levels.”

Simultaneously a “future vision” and “strategic plan,” Cairo 2050 ranges from very general goals (e.g. increasing quality of life) to very specific area plans. Implementation would begin with the Cairo 2020 projects which focused on developing Northern Giza and the old Imbaba Airport, evacuating Cairo’s unsafe areas, de-densification of informal areas, adding new lines to the subway metro system, transferring Cairo’s cemeteries (also known as “city of the dead”) to the city’s outskirts and using that space for parks and green landscapes. According to Madbouly, this would take place in parallel with nation-wide efforts to identify the urban cordons and desert hinterlands for Egypt’s cities, and develop strategic plans for each city.

The Cairo 2050 presentation insisted on the importance of having a vision for the Greater Cairo Region (GCR) just like other global cities such as Tokyo, Sydney, Paris, Dubai, and Shanghai. Based on the slogan “Global…Green…Connected” the plan was based on redistributing a significant part of GCR’s population to lower the population density in overcrowded areas, improving the road and transportation networks, and creating green public spaces.

These suggestions were proposed with the aim of creating comprehensive development, attracting investment, strengthening the tourism sector, creating job opportunities, and raising the quality of services, which would altogether contribute to raising the standard of living in the city. Cairo 2050 attempted to limit the growth of the GCR by setting a population cap of 24 million people. It also envisioned Cairo as an environmentally-friendly region city that is able to preserve and take advantage of its cultural and historical heritage.

The plan’s development was led and steered by various government entities including primarily the GOPP, the Prime Minister, leaders of the then ruling (now-dissolved) National Democratic Party, and representatives from various line ministries.

As for the funding mechanism, in 2007, 20 million Egyptian pounds were made available in the budget of the GOPP for two years to contribute to the preparation of the plan and prioritize the projects through tendering consulting offices both local and international. A number of agreements were signed with different donor agencies to give financial and technical support such as the Japanese International Aid Agency (JICA),the Cities Alliance,the World Bank,the United Nations Development Programme (UNDP), and the United Nations Human Settlements Programme (UN-Habitat).

By 2010, then Prime Minister Ahmed Nazif had approved the plan and was presenting it to the cabinet of ministers. It was also during that time that information about the plan had become more accessible, and discussions were taking place in planning circles, among urban researchers, and among human rights organizations. Cairo 2050 started being described using terms such as “controversial,” and it was becoming clear that urban observers were not taking the plan with its green spaces and grand boulevards at face value. The main issue was that the proposed vision for Cairo would potentially entail relocating entire neighborhoods of low-income citizens, something the Egyptian government had a less than stellar history of doing. Many of the areas included in the plan were surrounded by informal housing that would have to be removed in order to execute the planned projects. For example, a map in the 2008 GOPP presentation has the words “touristic housing resort (previously Mansheyet Naser)” printed over one of Cairo’s most populated informal areas.

The second controversial issue was that the proposed projects and solutions mainly served the interests of businessmen and investors and not the average Egyptian citizen, and that the plan was being used to distill Cairo of the poor.

The third issue was related to the top-down approach through which the plan was designed, which fell far short in terms of transparency and public participation. In fact, most citizens were not even informed about the plan, and the information available through the media was not detailed and sometimes even contradictory. For example, the various GOPP presentations that had been leaked through blogs and websites often contained different information, and sometimes the Arabic versions did not match the English ones. Furthermore, although a survey about the plan’s objectives and design was conducted in 2009, it relied on very vague questions that virtually guaranteed unanimous agreement, such as “all respondents agreed that housing programs should consider the social dimension.”

What has Happened Since?

Up until January 24th 2011,the GOPP was still defending and promoting Cairo 2050. However by late 2011, after people took to the streets demanding social justice, Cairo 2050 was dismissed by the GOPP as merely “a dream.” Thus it seemed that the first phase of Cairo 2050 – which can be labeled as the pre-revolution phase from 2008-2011 – was over.

However, during 2012 talk began to reemerge about a revised Cairo 2050 and its related revised nation-wide plan, which would now be called Egypt 2052. Similar to Egypt 2050, Egypt 2052 focuses on various parts of Egypt with the aim of drawing people away from the narrow Nile Valley area and dispersing the population more evenly throughout the country’s entire area_east- and westward towards the desert. To do this the Ministry of Planning would promote the development of some of Egypt’s underused areas and the same logic would be applied to the Cairo region by drawing people away from the city center and towards the new desert towns.

By late 2012 Egypt had a new minister of housing, Dr.Tareq Wafiq, and media was reporting that the Ministry of Housing was preparing to announce a new strategic vision for Cairo that would replace Cairo 2050 and dismiss all its problematic components and remove the words “Cairo 2050” from the title. However, during an interview with then Minister of Housing, Dr. Wafiq Dr.Tareq Wafiq, he insisted that the GOPP was leading this effort with barely any involvement from him or his Ministry of Housing.

There wasn’t much said about the plan in 2013 as Egypt witnessed another set of political upheavals, but UN-Habitat continued on with the process of supporting the plan’s revision by the GOPP. Since no new information was released about the plan during this period, many still attacked the plan based on the available information about it, but UN-Habitat project manager Bassem Fahmy insisted the new revision was tied “much more [tied] to reality.”

During 2014, Egypt saw two new ministers of housing; the first was Ibrahim Mehleb who was later appointed Prime Minister and in March 2014,Mostafa Madbouly, former head of the GOPP during Cairo 2050’s birth,became the new Minister of Housing and Madbouly continues to hold his office under Egypt’s new president. Recently more information has been made available about the plan as the GOPP and UN-Habitat seem to be finalizing the revision process.Today, it is no longer called Cairo 2050, nor is the date 2050 mentioned at all by spokespersons. According to some community discussion sessions held by the GOPP, the new plan is called “the GCR Strategic Development Vision (SDV)” and according to a booklet published recently by the GOPP the plan is named “the Strategic Plan for the Development of the GCR.” So, it seems it continues to be both a general vision and a detailed plan, something that is as reflected in the content of the booklet. Similarly to the previous iterations of Cairo 2050, the information available in the latest booklet ranges from very general aims revolving around improving life in Cairo, to very specific area plans for some neighborhoods. It currently contains the following 22 projects (as stated in the aforementioned booklet):

The GOPP and UN-Habitat are currently in the process of disseminating this booklet to universities and planners, and are also concluding the “participatory” portion of the plan’s development. It is not yet clear how or when some projects will be implemented, as some area plans are yet to be integrated into the already existing projects of the three governorates included in the GCR. Generally speaking, there is still quite a bit of “ambiguity” in regards to the plan, its implementation, and its expected impact.

This series of articles will attempt to expose what information is available about the plan and provide a critical and balanced analysis of the approach used in its development, as well as the potential impacts of its projects. TADAMUN believes that it is only by sharing information in a timely, comprehensive and transparent way that true participatory development can be achieved.