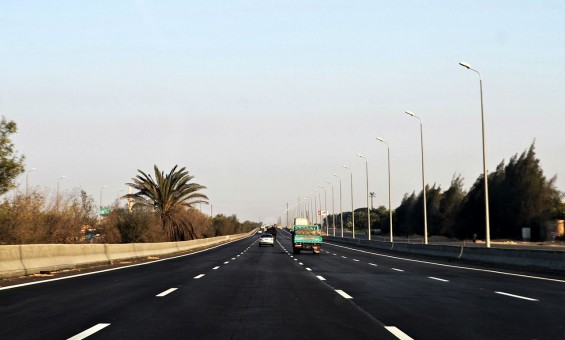 Egypt suffers from severely underdeveloped infrastructure; although 90% of the country’s roads are paved, an average of 30% of the paved network is in poor conditions (The World Bank, 2011). This does not account for the percentage of unpaved roads in worse conditions. The deteriorating state of the streets is a result of neglecting periodic and routine maintenance necessary for the used paving material, asphalt.

The authorities’ resort to asphalt as the key paving material is one of the reasons for the resulting poor quality due to its expensive nature. The initial construction cost for asphalt amounts to 6.2 million EGP/km with an additional 370,000 EGP/km for periodic maintenance and 12,500 EGP/km for routine maintenance (Archondo-Callao, Nogales, & Bhandari, 2004). In other words, a 250-meter long pavement would have an initial cost of approximately EGP 1.5 million, with an additional EGP 95,000 for periodic maintenance and EGP 3,000 or routine maintenance1.

Asphalt is also difficult to install and maintain without the right resources, requiring trained individuals. Its construction poses environmental threats as the release of hydrocarbons leads to pollution, and installing or repairing underground utility networks requires the road to be repaved for a costly amount which is frequently left undone in Egypt.

Despite asphalt being the optimum solution in many cases, it is not a solution fit for all road surfaces. On the other hand, there are alternative methods that are better fit for different circumstances, depending on the type of road and its structure.

Roads can be classified according to function and capacity) as follows: primary (or arterial) roads, secondary (or collector) roads, and tertiary (or local) roads. Primary roads carry the highest volume of traffic and run for large uninterrupted distances, secondary roads carry a lower load of traffic and connect tertiary roads to primary roads, while tertiary roads carry the least amount of traffic with the lowest vehicular speed, allowing for high pedestrian use, and run within residential areas – this includes pedestrian streets and alleyways (The Federal Highway Administration, 2000).

A second classification for road types, which serves as a basis for the selection of the surface material is the method of construction or the road structure. There are two categories of road structures, rigid and flexible, which differ according to the load distribution pattern. In the case of rigid roads, the load is carried solely by the concrete slab surface layer with a typical thickness of 150 millimeters (mm), up to 300 mm and is generally implemented in heavy duty areas, such as airports and major highways; not commonly used in Egypt. This type of road is composed of three layers above the natural subgrade: a compacted/prepared subgrade, a base course and a plain, reinforced or pre-stressed concrete slab as a surface layer Figure 1 (left). For flexible roads, the load is distributed across the different layers; this is the most commonly used method in Egypt. It consists of four layers above the natural subgrade: a compacted subgrade, a sub-base, a base course and a surface layer, as seen in Figure 1 (right). The structural capacity of flexible roads depends on the characteristics of every layer, while the structural capacity of rigid roads is only dependent on the characteristics of the concrete slab. The layers of the flexible roads are further described below:

Figure 1. The layers of a rigid road (left) and a flexible road (right)
Adapted from “Flexible Pavement Definition”

After the road type and structure is established, the road shape, or cross section is selected based on the necessary surface drainage system, the soil stability and the expected traffic volume. There are five main types of road cross sections, as discussed below: crowned fill or turnpike section, outslope section, inslope section and crowned ditched section.

Crowned Fill & Turnpike Section
The crowned cross section is typically used for relatively flat terrain and is best suited for two-way traffic uses. In other words, it most suitable for primary or secondary roads with heavy traffic as opposed to narrower tertiary or rural roads where the maintenance of the crown and the required drainage system may be difficult.

As illustrated in the figure, the cross section is not flat, but is slightly arched where the center of the road is the highest point and it slopes down towards the edge where side drains are located. This is done to allow water to run off the surface to the drainage system and is called camber. Typically, road camber is set at 3% (1:33) where for every 1 meter run, a rise of 33 cm occurs.

Outsloped Section
The outsloped cross section is used for moderate slopes and low volume roads with stable soils, where the need for side drains and cross drainage is reduced. The use of this method minimizes the necessary width of the road and is the least expensive to build and maintain. As illustrated in Figure 2, the cross section slopes outwards with a typical camber of 3%.

Insloped Section
The inslope section is used for steep hills where the soil is finer and requires an efficient drainage system. This method requires a system of side drains and cross drains efficiently spaced and an added road width to accommodate the side drain. As illustrated in Figure 2, the cross section is sloping inwards with a typical camber of 3%, towards a side drain.

Crowned & Ditched Section
In the case of a high volume road on a steep hill, a crowned ditched section (Figure 2) can be used where instead of sloping inwards as in the insloped section, it will be crowned with the highest point in the center and sloping down on either side with a typical camber of 3% (Keller, & Sherar, 2003; Wiest, 1998). 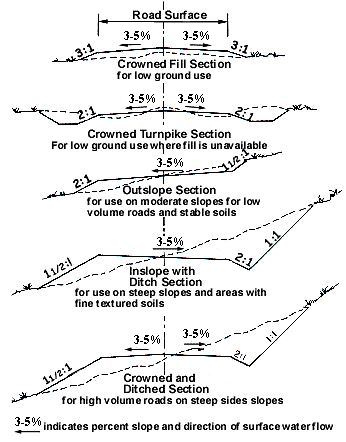 Problems with Roads in Egypt

The reasons for the poor paving conditions in Egypt are many, including the improper implementation of the layer requirements for the used flexible road structure, the lack of efficient road cross sections, and the use of asphalt as the primary paving material in most, if not all, road surfaces, regardless of the road’s type, structure, function, capacity, or soil stability.

The absence of preventive maintenance leads to the occurrence of extensive distresses which are also left unattended and continue to depreciate until the road requires complete rehabilitation or reconstruction for a high cost, which is consequently left undone. If preventive maintenance is effectively introduced, the lifetime of the road would remain in good condition and it would introduce significant cost savings for reconstructing previously paved roads.

Conventional maintenance methods require access to asphalt, which is currently in limited supply in Egypt. Alternatively, there is a method known as ‘whitetopping’ which involves the use of plain Portland cement concrete on top of an existing asphalt pavement which is a more easily available product and is a more long-term solution. Studies show that this method has a higher initial cost, but an overall lower life-cycle cost and can be implemented on primary, secondary and tertiary roads. There are three main forms of whitetopping; ultra-thin whitetopping, thin whitetopping and conventional whitetopping. These methods are primarily applied to repair surface distresses including: rutting, fatigue cracking, block cracking, thermal cracking, and potholes on asphalt pavement that is from 15 – 20 years old (Patel, Ramanuj, Parmar, & Parmar, 2012). Rutting is a depression of the surface layer, fatigue cracking is also known as crocodile cracking and is a series of interconnected cracks in the surface layer, as is block cracking; the difference between the two is that fatigue cracking resembles the back of a crocodile, and block cracking forms rectangular pieces. Thermal cracking are cracks that are perpendicular to the pavement’s centerline and potholes are a depression caused by the presence of water and traffic as illustrated below (Pavement Interactive, 2006, 2008, 2009a, 2009b).

Conventional whitetopping, also known as classic whitetopping, is defined as a concrete overlay with thicknesses of 200 mm or more. This method is efficient as it can be applied directly on the existing asphalt surface with little to no surface preparation or bonding necessary (Patel, Ramanuj, Parmar, & Parmar, 2012). This method is applicable on primary roads where the surface damage of potholes or rutting is less than 50 mm in depth. In the case of deeper potholes, the surface will need to be milled prior to application. Milling is the process of removing part of the damaged road surface to be replaced by the concrete overlay.

Thin whitetopping is a concrete surface overlay with thicknesses ranging from 100 – 200 mm where joint spacing every 1.8 m is utilized to ensure good surface performance. This method does not require bonding or surface milling, but it is preferable. Thin whitetopping is applicable on secondary or tertiary roads with low to moderate traffic volumes (Patel, Ramanuj, Parmar, & Parmar, 2012; Yu &Tayabji , 2007).

Ultra-thin whitetopping, unlike the conventional method, is a relatively newer technique applied in thicknesses ranging from 50 – 100 mm to renew and repair an asphalt surface without increasing its structural capacity. The mix of concrete utilized is reinforced with fibers to achieve rapid strength gain and must be bonded to the existing surface to ensure a strong pavement is achieved utilizing joint spacing ranging from 0.6 – 1.2 m. This method is applicable mainly on low-volume, tertiary roads, suffering from rutting issues. Surface milling is necessary in this case to ensure good pavement strength and performance; typically at least 75 mm of the existing asphalt is needed to support the concrete overlay, the depth to be applied is milled off from the existing so the surface level remains the same (Patel, Ramanuj, Parmar, & Parmar, 2012; Sharma, 2013).

Traditional, thin and ultra-thin whitetopping require the same set of steps for application with minor alterations as explained below. 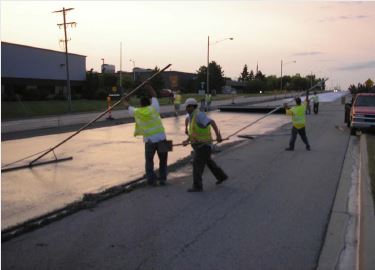 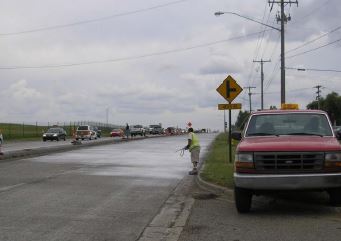 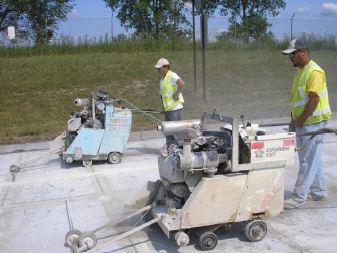 For further alternatives, see Practical Solutions | Low-Cost Street Paving Alternatives. 1. Routine maintenance is required on a regular basis and includes non-pavement related maintenance activities such as drain cleaning, road sign cleaning and repair, as well as pavement related maintenance such as repairing pot-holes. On the other hand, periodic maintenance is conducted at 3-5 year intervals and repairs pavement damages and wear that are not covered in routine maintenance, such as regravelling shoulders and line marking (The International Labor Organization ,n.d.).
2. Fly ash is a byproduct of burning coal.

Sharma, A. (2013). Guidelines for the Design and Construction of Ultra-Thin White Topping. The International Journal of Engineering and Science, 2(01). Link