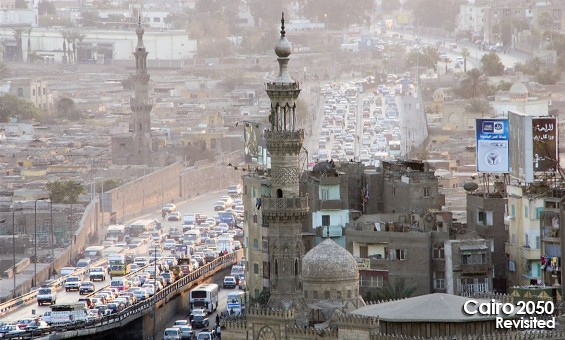 Cairo 2050 Revisited: Where is the Cairo Strategic Development Vision?

On April 25th 2014, Al-Shurūk newspaper published an article about the Cairo Strategic Development Vision (CSDV) being prepared for the Greater Cairo Region (GCR). The article describes the CSDV as one that is meant to “save” Cairo from the problems it is facing such as traffic and weak public services, among others. It then emphasizes that the CSDV is biased towards low-income groups, and that it is for Cairo residents of all socio-economic backgrounds.Several positive points are mentioned in the article about the CSDV and its professed participatory nature. However, the article fails to make one very important point, which is: there is actually very little information available about the strategy. Until today, it has not been made public, and the little information that is available does not give a comprehensive picture of how the plan will affect Cairo’s residents.

At present there are two sources from where one can obtain information about Cairo’s strategic urban development. The first is the (invitation-only) community discussion sessions held by the GOPP and UN-Habitat to discuss specific projects.

The three community sessions held so far have been somewhat informative about the three specific projects that were discussed, but only for the limited number of people who attended these sessions. However, the only source that offers information about the plan as a whole is an unpublicized document that has been developed by the GOPP with the contribution of UN-Habitat. The document was prepared as a means to inform the public about the plan, and dissemination of the document will begin soon. While the document contains a lot of interesting background information about the problems that Cairo faces and is expected to face, as well as the specific areas targeted by the development plan, it fails to detail the proposed development plans to take place in these areas.

A prime example of this is the Al-Matareya area, which is slated for development as part of the CSDV. The level of detail available in the document regarding what is planned for the area does not extend beyond very broad statements such as “dealing with unplanned areas.” Although more information about the plan for Al-Matareya was given at the community discussion session mentioned earlier, there was still a lot of ambiguity regarding what is envisioned for the area’s slums.

Such ambiguity makes it extremely difficult for Cairo residents to obtain information about what is being planned for their city in general, and for their areas in particular. Not to mention that information from different sources oftentimes conflicts.

For example, the Al-Shurūk article states that the CSDV places special importance on studying the potential socio-economic impacts, and that based on this the new vision aborted many of the original Cairo 2050 plans that would have entailed forced eviction, such as the Maspero Triangle project. While it is true that the Maspero Triangle is not mentioned in the CSDV document, the project is still listed on the Cairo Governorate website.

Thus, once again, Cairo’s residents are left with a muddled picture of what is being planned for their city. The Al-Shurūk article claims in its headline to “expose the details of Cairo’s urban development strategy,” and yet just like the strategy document, it leaves its readers with information that is vague and incomplete.

The 2014 Egyptian constitution states that “information, data, statistics and official documents are owned by the people,” and one of the benefits of this right is that it ensures that “public authorities do not hold information for their own benefit, but for the public good.” How can the GCR’s approximately 19 million residents ensure that plans promote their best interest if they do not even have accurate information about these plans? The Egyptian citizen should not only be adequately informed about development plans, but should also have the opportunity to participate in the development of such plans. Until this happens, citizens cannot be guaranteed that development plans truly serve the public interest.

No participation without information.